The smallest and Northernmost capital in the world awaits you. This fascinating town of contrasts will offer you a glimpse of old Greenlandic culture and beautiful Arctic nature, whilst providing the convenience of a small, modern city with good restaurants, great shopping and comfort. Approximately 16,000 people live in Nuuk and the town is situated in a beautiful fjord system, where in summer whales come in close and can be seen from the shore. Nuuk has plenty to offer, with high quality art and craft work, the Greenland National Museum which houses a wonderful collection of artifacts and exhibits related to Greenland's archaeology, history, art, and handicrafts, and the famous Qilakitsoq mummies. Also not to be missed is the architectural marvel of Katuaq, the new cultural centre which design was inspired by the waves of the northern lights, icebergs and the play of light on ice and snow.

The tour is offered as a 4 or 5 day package. The itinerary shown below is for the 4 day tour. The 5 day tour has one additional night in Nuuk.

Make your own way to Reykjavik Domestic Airport for your flight to Nuuk. On arrival in Nuuk, meet your local guide and transfer to your hotel, with a tour of the city on the way, starting at the Colonial Harbour. Visit the National Museum to take a quick look at the famous Qilakitsoq mummies, then visit Our Saviours Church built in 1849, the Parliament, and the Atlantic harbour, which is usually full of life. The tour also take you to Katuaq, the cultural centre of the town. Accommodation at Hotel Hans Egede or similar. Dinner at the hotel.

The Nuuk Fjord has beautiful scenery and a huge abundance of fish, birds and other wildlife. Today enjoy an exploration by boat of the area between Nuuk and the island of Sermitsiaq, where eagles are known to nest, and hopefully encounter some of this truly unique wildlife, as well as a glimpse into the lives of the local fishermen and hunters who make their living here. The remainder of the day is at leisure. Dinner at the hotel.

Day 3 Nuuk: Day at Leisure or optional excursion to the Icefjord By Boat with Kapisillit Visit

Today there is time for you to explore Nuuk. Perhaps re- visit the Greenland National Museum which has exhibitions tracing the nation's history through excavated tools, crafts and artifacts, as well as the famous mummies. The museum was started in the mid-1960s as the first museum in Greenland, and the collections have since expanded to include items from excavations and material repatriated from the Danish National Museum. The museum also houses Greenland's central registers of listed buildings and monuments, undertakes conservation of protected monuments and buildings, and participates in nature conservancy and urban planning.

Or visit the Nuuk Art Museum. The Museum was a gift from Svend and Helene Junge Pedersen to the people of Nuuk. It was opened in 2005 and is situated in the former Adventist Church, just a few minutes' walk from the centre of Nuuk. The museum has a permanent exhibition of works collected by the Pedersens which includes an extensive collection of historic art, and a smaller one of more recent art. There is also a great collection of carvings in soapstone, bone, wood, and ivory from all around Greenland. Nuuk Art museum has also created an art walk around the city- discover the spaces and the art works on the route between the Museum and the colonial harbour. Along the way, you can find redfish, polar bears, seals, Greenlandic legends and myths interpreted and “let loose” in the city of Nuuk.

Or join an optional excursion to the Icefjord By Boat with Kapisillit Visit. Start today by sailing 2.5 hours from Nuuk, into the eastern part of the Nuuk Fjord. We land near the settlement of Kapisillit, the last permanent settlement in the Nuuk Region, and explore, spending around 1 hour in the village. After lunch on board we return with a stop in Qoornoq, an abandoned settlement where we spend about 30 minutes, before returning to Nuuk. 7hrs duration.

Dinner at the hotel.

Breakfast at the hotel then transfer to the airport for your Air Iceland flight from Nuuk to Reykjavik Domestic Airport. Your tour arrangements end with your arrival at the airport in Iceland.

The price is based upon a certain class on flights to and from Greenland - if this class has sold out, the final price may increase, depending on the availability and cost of other classes at the time of booking 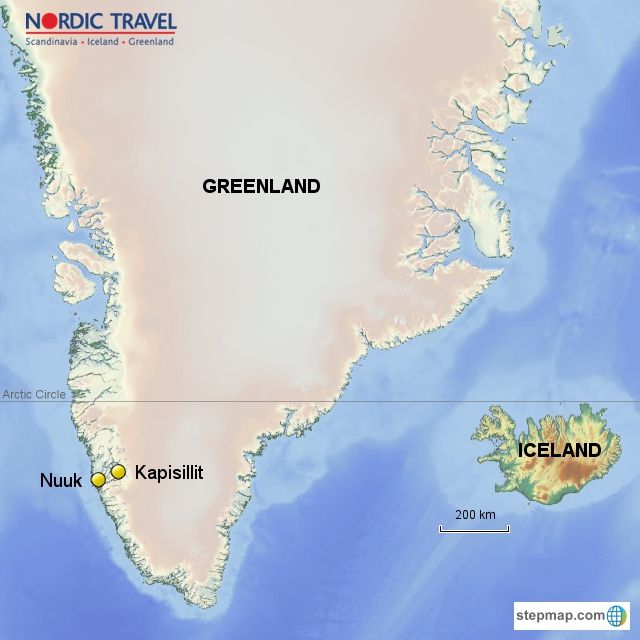