Around Iceland including the Westfjords & Snaefellsnes Peninsula
Reynisfjara, Iceland © Shutterstock

Iceland is a country like no other, with exceptional landscapes, some of the world's finest waterfalls, erupting geysers, stunning fjords, magical lagoons, active volcanoes, majestic glaciers and powerful lava flows as well as tranquil lakes with rare-breeding bird life. This small group tour takes you on an unforgettable journey around Iceland, including Snæfellsnes peninsula and the magical West Fjords. Experience the spectacular splendour and untamed beauty of Iceland's nature, breathtaking scenery and unique Icelandic history and culture. We stay in simple and charming guesthouses, farm and tourist-class hotels, many of them set in the most stunning locations.

"The best I have ever been on. Everything went like clockwork and the hotels, food and guide were exceptional. Well worth every penny.” - Val K. Sydney, Australia 2018

On arrival at Keflavik Airport take the coach shuttle to your Reykjavík hotel. The small city centre is characterised by eclectic and colourful houses, good shopping, dining and drinking. Reykjavík has recently established itself as a haven for food lovers, with numerous restaurants taking advantage of the abundance of local seafood, meat and game. Reykjavik has many wonderful museums including the National Museum displaying artefacts from the first settlement to the modern age, giving an excellent overview of Iceland's history and culture, the Reykjavik 871+2 Settlement Museum, an archaeological museum based around a 10th century Viking longhouse unearthed in 2001, the Reykjavik Art Museum and the National Gallery. Overnight in Reykjavik.

Depart Reykjavik this morning and start the day with a visit to a geothermal greenhouse and horse stables. Travel along Iceland's classic Golden Circle Route with a stop at Gullfoss, the beautiful double 'Golden Falls'.  Walk through the active geothermal area of Geysir, where Strokkur 'the Churn' spouts up to 25 metres every 5-7 minutes. Next stop is a visit to the ancient Viking Parliament area, then the UNESCO world heritage site of Þingvellir National Park. The Þingvellir plain is situated on a tectonic plate boundary where North America and Europe are slowly tearing away from each other. As a result, the plain is scarred by dramatic fissures, ponds, and rivers, including the great rift Almannagjá.  Then we continue to our overnight location in Borgarnes, a small town at the shore of Borgarfjörður.

The Snæfellsnes Peninsula, 'the peninsula of the snowy mountain', juts out from Iceland's west coast, like a long arm with a clenched fist at its tip, and is in many ways a microcosm of the whole island. A rugged mountain chain runs its length, capped by the 1446 metres Snæfellsjökull, a mystical cone-shaped strato volcano. We travel around Snæfellsnes Peninsula, through lava fields and along the ocean with many classic photo opportunities. We visit the national park where volcanic craters, lava flows, an ice cap, glaciated peaks, fjords, sandy beaches and high cliffs shape its landscapes, the setting for Jules Verne's classic science fiction novel Journey to the Centre of the Earth. You can also enjoy an excursion under the glacier Snæfellsjökull, on a lava cave tour that takes you 35 metres underground and about 200 metres into the lava cube of Vatnshellir. During the tour you reach two different sections of the cave via a long, narrow staircase. The upper section has great features and unique formations of natural lava statues carved on the sides tube. In the lower part of the lava cave you experience total quietness and darkness when your guide switches off the light!

In the afternoon, we catch the car ferry Baldur from Stykkishólmur to Brjánslækur in the West Fjords. On the 2.5 hour journey over Breiðafjörður Bay, we pass the island of Flatey, which is inhabited only during the summer. If the weather is nice, you enjoy a magnificent view of the bay's countless islands as well as Snæfellsjökull glacier. We will stay two nights in the area of Patreksfjörður.

We follow the coastline and stop at the folk and transport museum in Hnjótur. We continue through a very remote and sparsely populated region to the bird cliffs of Látrabjarg, the westernmost point of Iceland (and Europe) where you can see puffins (mid-May to mid-August). We take a memorable walk to the top of the highest bird cliff in Iceland. Látrabjarg is known for its density of Nordic birds - puffins, razorbills, guillemots, fulmars, cormorants, kittiwakes and other cliff birds flock in great numbers. This is a place where you can get very close to the seabirds and even if you're not a birdwatcher, you will be entertained by the comic puffins and mesmerised by the sheer number of birds.

We travel over mountains and along the shore of many scenic fjords until we reach majestic Arnarfjörður, surrounded by high mountains. At the bottom of the fjord we come across the unique waterfall Dynjandi with its seven levels of plunging water, declared the country's most beautiful waterfall by the people of Iceland. We continue over a mountain pass and travel along the southern shores of the West Fjords. This is a route less travelled and is characterised by sheer cliffs, deep cut bays and narrow stretches of coastal lowland. We reach Haukadalur, where there’s a rather authentic-looking replica of the homestead of Erik the Red, the famous explorer who founded the Icelandic colony in Greenland. His son Leif-the-Lucky, born in Haukadalur, Iceland, was the first European to set foot in North America. Now the excavated and reconstructed farm in Haukadalur is a living Viking museum, a fun, informative and a photogenic place. The landscape is dominated by mountains, lakes, valleys, sea and wide-open spaces. Overnight in Hvammstangi.

In the morning we travel mostly off-the-beaten path, seeing abandoned farms, beautiful little country churches and Icelandic horses. A gravel road takes us around the peninsula to Hvítserkur, a highlight on the east coast of the region; a mass of igneous rock, about 15 metres high, situated on the seashore. Fulmars and gulls live on Hvítserkur. An old story has it that Hvítserkur is a petrified troll that intended to stone a nearby cloister, but dawn arrived before he could succeed. Later take a short walk up to Borgarvirki, on a 180-metre ridge. The ruins of Borgarvirki are a circular, fort-like stone enclosure rising above 10-15 metre basalt columns. Inside are the remains of a well and some dwellings. We continue to Kolugljúfur canyon, where waterfalls cascade into the deep, rugged gorge. It is a breathtaking sight to walk on the viewing platform and watch the calm waters of the river suddenly leap and tumble onwards over so many impressive falls. Further north we stop at Víðimýri to visit one of the few preserved turf churches in Iceland. The church was built in 1834 and has turf walls, but timber gables both back and front. We visit Glaumbær, one of Iceland’s most beautiful turf house farm and folk museum. Then continue along a high mountain before we arrive at the the charming town of Akureyri, Iceland's 2nd largest city. Two nights in Akureyri.

Enjoy breakfast in the beautiful surrounding of the botanical garden in Akureyri. During today's excursion we see spectacular fjord landscapes while travelling to Siglufjörður, Iceland's northernmost town and known as the herring capital of the North Atlantic. Siglufjörður is located on the mountainous Tröllaskagi Peninsula. On the way, we pass small fishing villages and stop at a deserted valley that even most Icelanders have not seen. Included is a visit to the Herring Era Museum in Siglufjörður. It is Iceland’s largest maritime museum and the only Icelandic museum who has won the European Museum Award. A chance to taste the herring along with Brennivín, Icelandic schnapps. Enjoy an afternoon whale watching and sea angling boat tour in Eyjafjörður, before returning to Akureyri for 2nd overnight.

Today explore Goðafoss, the waterfall of the Gods, and continue to Lake Mývatn, known for its rich bird life and extraordinary volcanic lava landscapes. Visit pseudo craters, walk in the lava field Dimmuborgir, see the ash crater Hverfjall, explore the hot springs and bubbling mud pools of Námaskarð, and travel to the crater lake Víti in the Krafla geothermal fields. We travel to Dettifoss, Europe’s most powerful waterfall, in the northern part of Vatnajökull National Park. The round-trip walk takes about 40-60 minutes. Then continue east through the bare and sometimes deserted landscape with mountains all around and head through the uninhabited highlands to East Iceland. We explore the northernmost fjord on the East Fjord mountain range. The isolated village Bakkagerði at Borgarfjörður Eystri has only 120 inhabitants; offering an end of the road location. This charming village is built snugly next to the steep mountainside and getting there is a dramatic but rewarding drive. The colourful mountains are unique and impressive.  Overnight in Borgarfjörður Eystri.

It’s a day to admire the dramatic fjord landscape and its tiny fishing villages at the end of twisty roads in the East Fjords. First stop will be at Vök baths, a geothermal floating pools in Lake Urriðavatn where you can soak in the hot water, within and surrounded by the lake. Later we visit Petra’s fascinating rock collection. A naturalist and a collector are two terms that have been used to describe Petra since she was a little girl. Petra collected for nearly 80 years this unique treasure of rocks, crystals, zeolites, quartz and more, all from the nearby area in the Eastfjords. In the afternoon we see Vatnajökull, Europe’s biggest glacier that is visible all over Southeast Iceland.  Overnight in Höfn area.

Today we visit Vatnajökull National Park which covers about 14% of Iceland, making it Europe’s 2nd largest national park in terms of area. We stop for a boat ride amongst the floating icebergs on the magnificent Jökulsárlón glacial lagoon. Take a walk along the black sands of Diamond beach. Then continue to the region of Skaftafell which is nestled below Iceland’s highest mountain and the second biggest stratovolcano in Europe, the 2.110-metre high Hvannadalshnúkur. We walk close to one of the many glacial tongues in the area. Cross a sandy desert before reaching our overnight location Vík, the southernmost village in Iceland.

Today we travel along the South Coast of Iceland, between the sea, rugged mountains, glaciers, and waterfalls. We explore the black lava beach, Reynisfjara, and bird cliffs before stopping at the Skógafoss waterfall, another must-see location in South Iceland. The crashing water creates a mist that results in frequent and magical rainbows, just adding some more memorable experiences to the sheer beauty of this stunning scenery and place. Afterwards, we reach Seljalandsfoss waterfall where you can follow a slick and wet trail and walk right behind it. Come prepared and bring a raincoat and good boots as you will get wet. Then we visit the Lava & Volcano Exhibition Centre focused on geology and active volcanoes and watch a documentary film about volcanic eruptions in the past years in Iceland. Farewell dinner at a local restaurant in Reykjavík, Iceland’s capital. Overnight in Reykjavik.

Arrangements end with your transfer by coach back to Keflavik Airport.

VIP Seating – Passengers will be seated in the front rows of the bus and have 2 x seats per person - their seat PLUS the seat beside them, guaranteeing them a Window Seat. More space, more comfort and social distancing. 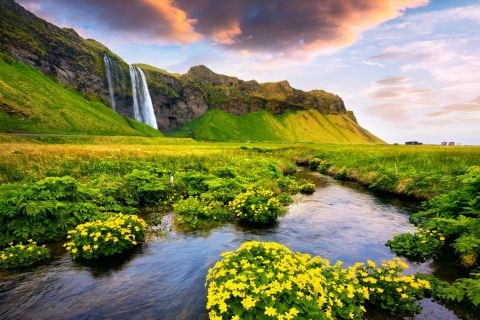