Travel in comfort by private car with your own driver-guide whilst you explore some of the best sights of Iceland, easily accessable from Reykjavik. Explore the city, visit the Golden Circle with Gullfoss Waterfall, the exploding hot springs of Geysir, and Þingvellir National Park, Reykjanes Peninsula on the west coast, and the south Shore.

On arrival into Keflavik Airport, transfer by private car to Reykjavík, for check-in at Reykjavik Marina Hotel or similar. Remainder of the day at leisure.

The city centre is a small area, characterised by eclectic and colourful houses, good shopping and dining. Recently established as a haven for food lovers, Reykjavik has numerous restaurants and many take advantage of the abundance of local seafood, meat and game. The city also has wonderful museums including the National Museum, displaying artefacts from the first settlement to the modern age, for an excellent overview of Iceland's history and culture. The Reykjavik 871+2 Settlement Museum, an archaeological museum based around a 10th century Viking longhouse unearthed in 2001. You may also like Reykjavik Art Museum and the National Gallery.

Reykjavík, the world's most Northerly capital, has more than one third of Iceland's population. Today with your private car and driver/guide visit the most important sights of the city, such as the Old Town, the amazing city cathedral, Hallgrimskirkja and The Pearl. Remainder of the day at leisure.

Combining natural and historical wonders, today you‘ll experience 3 of Iceland‘s landmark attractions in one incredible day, with your private car and driver/guide: the magnificent Gullfoss Waterfall, the exploding hot springs of Geysir, and Þingvellir National Park, site of the Viking parliament and over 1,000 years of history. Here, the world's oldest parliament was founded in the year 930AD and the European and American tectonic plates almost meet in a spectacular setting.

Today with your private car and driver/guide, travel along Iceland's South Coast, one of the country's most scenic regions, as far east as Vik village. En route, stop at gorgeous Seljalandsfoss waterfall, where you can walk behind the waterfall and through to the other side, and at dramatic Skogafoss Waterfall, with its 60m drop. Other highlights include spectacular views of the amazing Myrdalsjokull glacier, and the black sand coastline and impressive basalt Reynisdrangar rock formations near Vik.

Today with your private car and driver/guide, enjoy the highlights of the west coast. The first stop is at the ON Geothermal Energy Exhibition in Hellisheiði geothermal power plant, where we learn about the utilisation of geothermal energy in Iceland. Next is Strandakirkja, a small church by the coast, where there has been a place of worship since the 12th century. Then we continue on to the active geothermal areas of Krýsuvík and Gunnuhver, with dramatic coastlines and beautiful scenery, and to a shipwreck near the small fishing village of Grindavík. The final stop is at the "Bridge between the Continents" which connects the American and Eurasian tectonic plates.

Transfer by private car from your hotel to Keflavik Airport and end of arrangements.

If you have less time in Reykjavik this tour can be shortened or, if you wish to stay longer, you can add on extra nights and more great optional tours by private car with guide which include the following:

The Landmannalaugar Highlands by SuperJeep: 11 hours

Day tour availability/seasonality may also vary according to your precise dates of travel. 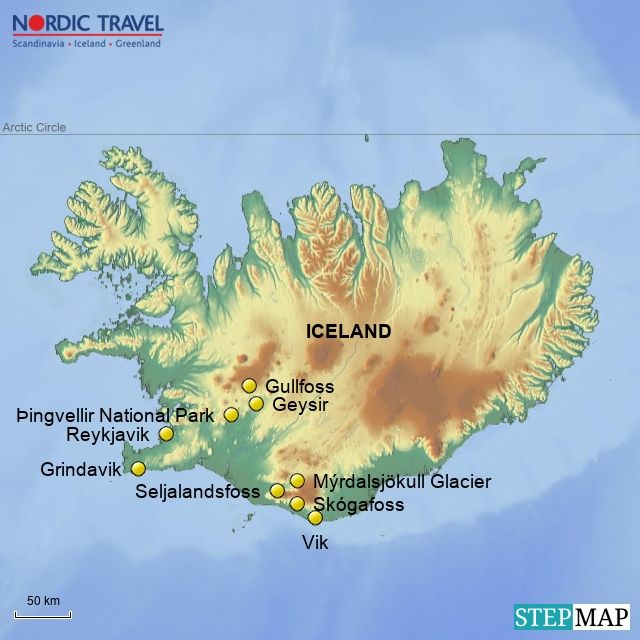