Visit the world's Northernmost capital and some of its great, nearby attractions. This short tour includes airport transfers, accommodation and guided excursions from Reykjavík. Enjoy city sightseeing, a visit to the famous Blue Lagoon and an exploration of the three sights that make up the fabulous Golden Circle - Gullfoss Waterfall, Þingvellir National Park and Geysir Hot Springs. You can also add extra nights and other great optional excursions to this tour.

On arrival at Keflavik Airport, transfer by airport bus to your hotel. The city centre is a small area, characterised by eclectic and colourful houses, good shopping and dining. Recently established as a haven for food lovers, there are numerous restaurants with many taking advantage of the abundant local seafood, meat and game. The city also has wonderful museums including the National Museum, displaying artefacts from the first settlement to the modern age, for an excellent overview of Iceland's history and culture. The Reykjavik 871+2 Settlement Museum, an archaeological museum based around a 10th century Viking longhouse unearthed in 2001. You may also like the Reykjavik Art Museum and the National Gallery.

Today enjoy a short Reykjavik city tour. See old Hodfi House, where the historic summit between American president Ronald Reagan and Russian president Mikhail Gorbatsjov took place in 1986. Pass the  stunning Harpa Concert Hall before continuing to the Hallgrimskirkja church, with its unique design being inspired by the basalt lava columns—a common volcanic rock formation in Icelandic nature. Stop at the viewing platform at Perlan and enjoy a breathtaking 360° view over the charming city of Reykjavik. The final stop is on the outskirts of the capital to visit Bessastadir, the official residence of the President of Iceland.

Then in the afternoon, take a non-guided coach transfer from the city to the Blue Lagoon, passing lava fields along the way. Enjoy a relaxing soak in the rejuvenating, aquamarine waters, rich in minerals and possibly healing powers. Return to Reykjavik by coach, at the conclusion of your visit - you can choose between several departure times.

This exciting excursion takes you to three of the 'must see' sights. Drive around Southern Iceland's fertile farming area and visit one of the most magnificent waterfalls, Gullfoss. Onwards to the erupting hot springs in Geysir area, before arriving at beautiful Þingvellir National Park. Here, the world's oldest parliament was founded in the year 930AD and the European and American tectonic plates almost meet in a spectacular setting.

2022 departures: daily all year
except for June and July - now fully booked

The order of excursions may change.

You can add extra nights and optional excursions (plus there are more, please ask us):

Wonders of Snaefellsnes - 12hrs (all year)
There is something so otherworldly about Snaefellsnes that Icelanders often associate it with spiritual experiences and folk tales. This tour provides an insight and spectacular views of this unique area where geological wonders border on the magical. The Snaefellsnes peninsula in the West of Iceland is almost like a miniature version of the entire island. The area has beautiful samples of most of the natural landscapes that make Iceland so famous. This includes black beaches, magnificent mountains, volcanic craters, incredible birdlife, magical caves, and of course, the most picturesque glacier of them all, Snaefellsjokull. Part of the peninsula makes up Snaefellsjokull National Park, the country’s only coastal national park. This tour visits the small fishing village of Arnarstapi and provides real insight into quintessential volcanic craters. Along the way you’ll get great views of the iconic Kirkjufell mountain (famous from Game of Thrones ), and the dark cliffs and black sand of Djupalonssandur bay are a favorite among photographers. In the middle of this beautiful peninsula sits Snæfellsjökull, the stunning glacier that has captured the imagination of people all over the world, including Jules Verne who mentioned it in his novel Journey to the Centre of the Earth. You’ll enjoy grand views of this beautiful volcano glacier. It is, after all, the real star of the show

Ice Cave Classic - 11hrs (all year)
After almost five years of preparation by top engineers and geo-physicists, you can now explore Langjokull ice tunnel, located high on Europe's second largest glacier. This is the world's first and biggest, man-made Ice Cap Glacier tunnel and your adventurous journey starts by travelling from Reykjavík. At the glacier, hop on board a monster, 8-wheel, glacier truck to reach the ice cave's entrance. Inside, you'll see unimaginable colours of blue and learn how glaciers hide the secrets of history. Spend around 1 hour on a guided tour within the glacier. Stop for lunch (not included) then continue through the Borgarfjordur valley. See Hraunfossar, a beautiful lava waterfall almost a mile long gushing through a wall of lava and the nearby Barnafoss waterfalls. Bring your own headphones for the in-bus audio guided tour. Headphones are also available to rent on the bus.

South Coast and Jokulsarlon Glacial Lagoon - 14hrs (all year)
Drive along Iceland's stunning south shore to extraordinary Jokulsarlon Glacial Lagoon. En route you pass small villages, stop at Seljalandsfoss and Skogafoss waterfalls, and have views of Skaftafell National Park - the green oasis at the foot of Vatnajokull, Europe's largest glacier.  At Jokulsarlon, you will see the floating icebergs and other large blocks of ice, as they make their way towards the ocean having originated from Vatnajokull Glacier, which sits on the edge of the lagoon's still, cold waters. Perhaps add on an optional 40 minute boat tour (from May to September only) on the Glacial Lagoon - this needs to be pre-booked. Visit the iconic Diamond Beach before returning to Reykjavik late evening.

South Shore Adventure - 10.5hrs (all year)
Drive along the country's South Coast, one of the most scenic regions, as far as Vik village and it's surrounding high bird cliffs. En route, we stop at gorgeous Seljalandsfoss Waterfall, were you can walk behind it and through to the other side. Also stop at much-photographed Skogafoss Waterfall, with its 60m drop. Other highlights include views of amazing Myrdalsjokull glacier, the black sand coastline and impressive Reynisdrangar rock formations.

Whale Watching - 3-5hrs (all year)
Depart from the Old Harbour, Reykjavík, on this great tour. Whales are beautiful animals and one of nature's most extraordinary sights. Experienced guides on board will share their wealth of whale knowledge, as well as some interesting facts and old sea stories about encounters with these magnificent creatures. The whales around these parts are not shy, often surfacing quite close to the boat and, as our sea-faring guides will tell you, to see a whale up close is truly is a sight to remember.

Into and Above the Glacier Snowmobiling - 10-11hrs (Oct-Apr)
Set off from Reykjavíik towards Husafell in Borgarfjordur by coach. From Husafell, ascent to the Langjokull Ice Cap. Begin your guided snowmobiling trip from the base camp at Jaki, on the west side of the glacier. After snowmobiling across the glacier, walk down into a magnificent man-made Ice Cave beneath the ice cap. Includes helmet, gloves, snow-suit. A valid driver’s licence is required. Two persons per snowmobile. Bring your bathing suit, towel and headphones for the in-bus audio guided tour. Headphones can also be purchased on the bus.

Northern Lights Hunt by Boat - 2-3hrs (01 Sep - 15 Apr)
Sail out from the Old Harbour in Reykjavík to a location away from the city lights, perfect for aurora hunting! The guide will share facts and myths about the magical phenomenon. 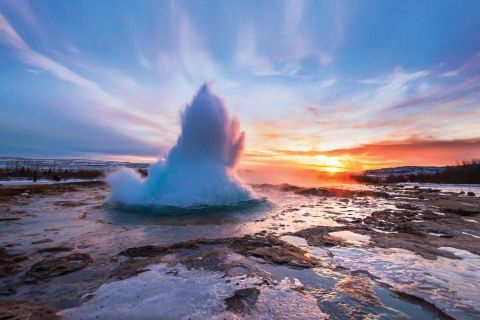 5+ days
Great excursions from your base in Reykjavik
More details 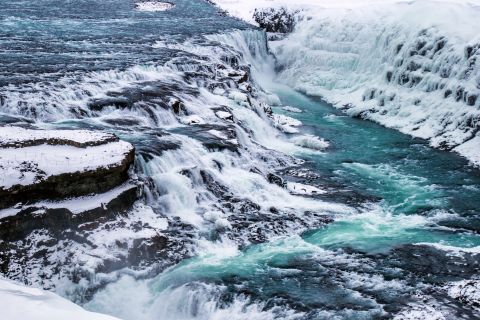