This tour is a fantastic combination of our absolute favourite things to do in Iceland, from the iconic sites of the South and West to hidden treasures and local flavours such as lava caving, Blue Lagoon bathing, traditional tastes and storytelling and, of course, northern lights hunting!

Coach transfer from Keflavík Airport to your hotel in Reykjavik. Remainder of the day at leisure to explore this fascinating, far Northern city. The city centre is only small and is characterised by eclectic, colourful houses, good shopping and dining. Having recently established itself as a haven for food lovers, numerous restaurants take advantage of an abundance of local seafood, meat and game. There are also many wonderful museums including the National Museum, Reykjavik 871+2 Settlement Museum and National Gallery. Evening information meeting at hotel.

Travel Northwest via an undersea tunnel through Hvalfjordur (Whale Bay) on your way to the rugged coastline of Snaefellsnes Peninsula. Visit secluded and charming fishing villages; view Iceland's most photographed mountain, Kirkjufell, and its surrounding fjord. In nearby Grundarfjordur village, you'll meet a local storyteller in his home for some funny insights, facts and fables about the Icelanders. Continue along the coastline, stop to admire columnar basalt formations and the crashing waves of the North Atlantic. Afternoon guided visit to Vatnshellir, an 8,000-year-old lava cave located at the foot of the Snaefellsjokull Glacier. The road then leads to the Borgarfjordur, a scenic and historical area. Dinner and overnight in West Iceland. If weather conditions are favourable tonight, you may head out on foot with your guide to search for the elusive Aurora Borealis in the area of your hotel. Otherwise, the Northern Lights Hunt will be on another night of your tour (subject to weather conditions).

The famous Golden Circle route begins with a visit to Thingvellir National Park (a UNESCO World Heritage Site), where Viking settlers established an annual assembly in 930AD. This parliament has now become the world's oldest ongoing. Thingvellir is also a geological masterpiece, as it marks the visible site of the mid-Atlantic Ridge where the North American and Eurasian continental plates meet. You can walk along a path taking you between the canyon marking the location of the ridge. Head through scenic farmlands to Gullfoss Waterfall and the nearby Geysir Hot Spring Area, alive with boiling mud pits, steam vents, and exploding geysers. The most famous of these is Strokkur, a high-spouting geyser that erupts every ten minutes. Stop at tiny Laugarvatn village for a taste of traditional “hot spring bread“, cooked in the warm ground by geothermal hot springs. Dinner and overnight in South Iceland.

Along the iconic South Shore, one of the main farm regions of the country, pass by typical Icelandic farms, often with Icelandic horses in the fields. Depending on the weather, you might also get a glimpse of Mount Hekla, Iceland's most frequently-erupting volcano. South Iceland is home to the LAVA Centre, an interactive, high-tech educational exhibition depicting volcanic activity, earthquakes and the creation of Iceland over millions of years. Enjoy both the exhibit and viewing an interesting film about Icelandic volcanoes. You might get a glimpse of Eyjafjallajokull, the famous ice-capped volcano whose 2010 eruption halted air traffic worldwide. Stop at two spectacular waterfalls, each with its own charm and character. Depending on the trail conditions you can walk behind Seljalandsfoss. Skogafoss is one of the country's most photographed waterfalls and is said to be the hiding place for ancient treasure. Pass over Eldhraun, the surreal and vast lava landscapes that were created in one single flow – the largest known in history. Spot glaciers as you head into Southeast Iceland, and the region of Vatnajokull, Europe's largest glacier. Dinner and overnight in Southeast Iceland.

Today you'll be in the Southern area of Vatnajokull National Park, named after Europe's largest glacier. The entire park covers almost 14% of Iceland's landmass, and it's considered the largest National Park in Western Europe. Start with a visit to Jokulsarlon Glacial Lagoon, where icebergs float in the deep glacial waters. Nearby is Diamond Beach, where crystal clear remains of icebergs linger on the black sand before disappearing into the ocean. Visit Skaftafell, a “fire and ice” region created by volcanic activity and ringed by many glaciers. The road leads to Vik, Iceland's Southernmost village. Visit Reynisfjara beach, where you can take a walk on the black sands, admiring the extraordinary rock formations and thundering waves of the Atlantic Ocean. Dinner and overnight in Vik.

Coastal road to Reykjanes peninsula (a UNESCO Geopark). Visit Strandarkirkja, a coastal wooden church typical of those in rural Iceland. On to Lake Kleifarvatn, set in stark, moon-like surroundings. See numerous small hot springs, brightly-coloured mud pots, boiling pools and other types of geothermal activity. Continue under low mountains along the shoreline and craggy cliffs rising from the sea to Grindavik. Then head for the world-renowned Blue Lagoon. Set in a black lava field, this geothermal spa is a lagoon filled with warm mineral-rich seawater that provides the ultimate interaction and relaxation with Iceland's raw nature. Enjoy a soak in the healing waters. Overnight in Reykjavik.

Coach transfer to Keflavik Airport where your tour arrangements end.

Empty Seating – This is for passengers who would like to practise social distancing on the bus, and have a bit more space. Passengers get 2 x seats per person, meaning their seat PLUS an empty seat next to them, including a guaranteed Window Seat. 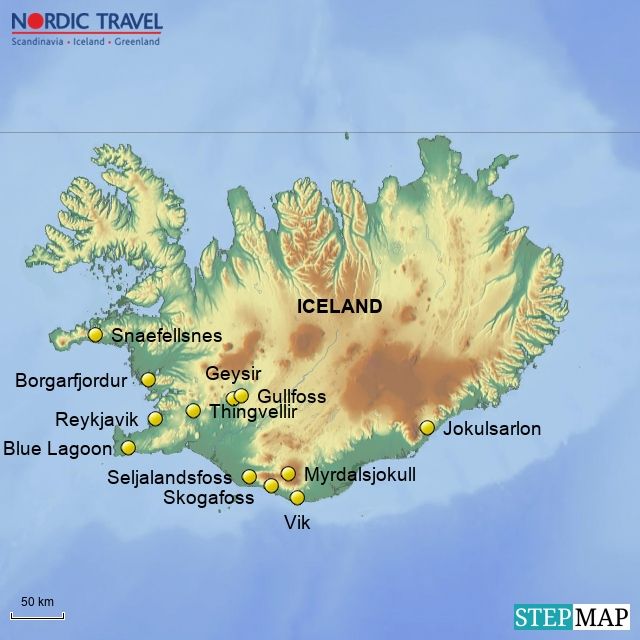 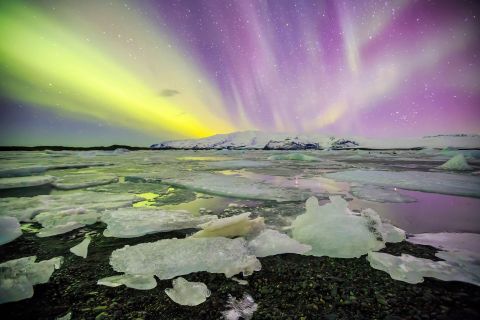