Iceland is the perfect place to enjoy a Winter trip full of adventure and icy landscapes. Explore this land of fire and ice with excursions to volcanoes, lava fields, hot springs and magnificent glaciers. Highlights include visits to the Golden Circle, South Coast and Vatnajökull National Park. Along the way see cascading waterfalls, smoking geysers, colourful volcano craters, a spectacular ice lagoon with floating icebergs, black lava beaches and more. With two overnights in the countryside, where there is no light pollution, there is always the chance for the night sky to be decorated with the jewels of the amazing Aurora Borealis!

On arrival transfer by coach from the airport to your accommodation. Time at leisure to explore Iceland's capital on your own. The city centre is a small area characterised by eclectic and colourful houses, good shopping, dining and drinking. Reykjavík has recently established itself as a haven for food lovers, with numerous restaurants taking advantage of the abundance of local seafood, meat and game. Reykjavik has many wonderful museums including the National Museum displaying artefacts from the first settlement to the modern age, giving an excellent overview of Iceland's history and culture, the Reykjavik 871+2 Settlement Museum, an archaeological museum based around a 10th century Viking longhouse unearthed in 2001, the Reykjavik Art Museum and the National Gallery.

At 08:30 meet your tour guide and fellow travellers. Start the day with a short city tour of Reykjavik before driving to Thingvellir National Park, a UNESCO world heritage site, where the Althingi, the oldest legislative assembly in the world, was first held. This is one of Iceland's most fascinating places, both geologically and for the role it plays in the country's history and sense of national identity. Thingvellir is also remarkable for reasons of natural science, as the site is part of a fissure zone running through Iceland, and is situated on the tectonic plate boundaries of the Mid-Atlantic Ridge. The faults and fissures of the area provide clear physical evidence of the rifting of the earth's crust. Exploring the hot springs at Geysir is like watching a geography lesson in real life: natural springs bubble away in the ground until the pressure becomes too much – and they explode in spectacular style! Geysir and Strokkur are the two biggest geysers here. While Geysir is not currently active, Strokkur still spouts every 5 to 15 minutes, to the delight of visitors. Next we travel to Gullfoss, "the golden falls", a double waterfall that tumbles 34m into the Hvítá River, one of Iceland's most beautiful waterfalls. Next visit the explosion crater Kerið, now full of glacial water and resembling an ancient amphitheatre. In the evening, listen to a talk on the Northern Lights from your guide, and once darkness falls, step out into the garden to seek the Northern Lights. Overnight in South Iceland.

Head East to a world of glaciers, ice and icebergs. We travel to Jökulsárlón Glacial Lagoon, filled with floating icebergs. We explore this extraordinary site and hope to see seals swimming in the arctic waters, and you can walk on the black sandy beach where large icebergs get stranded. The Vatnajökull National Park is about 12,000 square kilometres and is the largest National Park in Europe, with Iceland's highest mountains, an alpine environment and Europe's largest glacier. From mid-November to mid-March an optional ice-cave visit at Vatnajökull glacier will be offered. This can only be booked and with paid with the tour guide on Day 2 of the tour. Tonight enjoy a movie presentation about the Northern Lights. In this remote and quiet location, there is another chance of seeing the Northern Lights shimmering and dancing across the night sky. We stay for one night in the Vatnajökull region.

Today, we head across the Laki lava field to the village of Vík where we attend the Icelandic Lava Show, the only exhibition in the world where you can experience actual flowing lava! By melting lava and pouring it on ice in a room full of people, you will be able to see the lava flowing, hear it sizzling and feel the heat that radiates from it. Later we stop for a stroll on the black lava beach and along the bird cliffs at Reynisfjara beach, then travel on past Mýrdalsjökull Glacier and the infamous volcano Eyjafjallajökull. Continue to Skógafoss Waterfall, which at 60m high is one of the most impressive waterfalls in the country. Further west we reach the high but narrow Seljalandsfoss Waterfall, which plunges over the mountain. You can walk the trail that goes behind the fall for a different perspective, if you are prepared to get wet! In the evening we return to Reykjavik for the night. An optional Northern Lights bus tour or fjord cruise will be offered tonight, to be purchased locally and booked via your guide, if the weather conditions are ideal.

Transfer by coach to Keflavik Airport and end of arrangements. 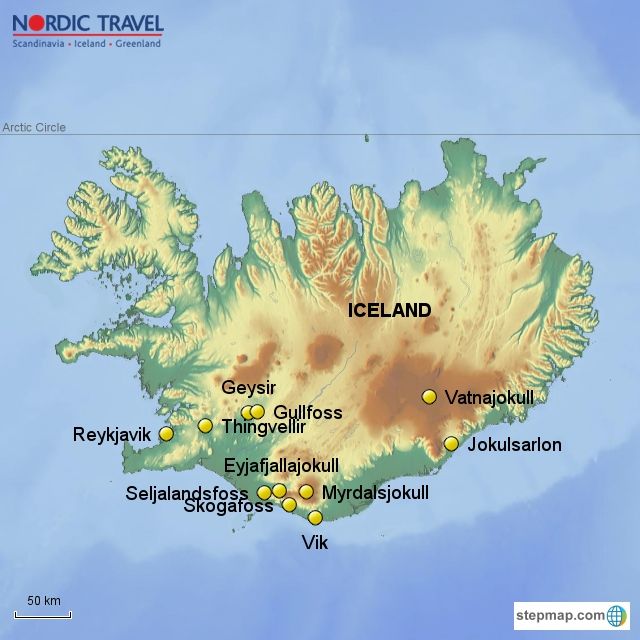 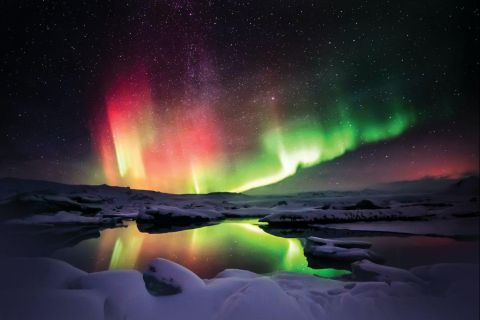 Land of The Northern Lights 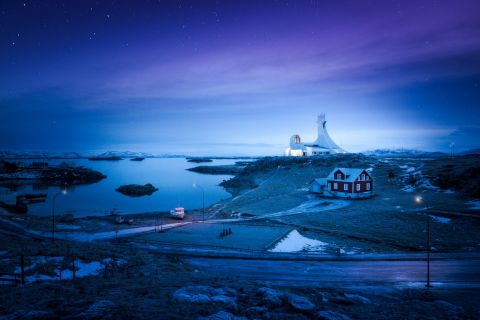