This tour starts in Stockholm, one of the world's most beautiful capitals, then travels by train to Kiruna to stay at the Icehotel, then to Abikso National Park, an area of wild and astonishing beauty, and the perfect destination to view the Northern lights. Then continue into Norway, to Narvik and on to Tromso, the Capital of the Arctic!

On arrival in Stockholm, make your own way to your hotel. Stockholm, the 'Beauty on the Water', is undoubtedly one of the most beautiful capitals in the world, built on 14 islands and protected from the sea by the Skargarden archipelago. Explore Gamla Stan's charming, narrow cobbled streets, take a canal cruise, see the Royal Palace, the Parliament Buildings, or the City Hall with its famous Blue Hall and Golden Room. Overnight in Stockholm at Clarion Amaranten Hotel or Scandic Downtown Camper Hotel or similar.

The day is yours to spend a few final hours in this delightful city. In the evening, make your own way to the central railway station and depart on the overnight train from Stockholm to Kiruna. Overnight on-board the train in a private sleeping compartment.

Arrive into Kiruna and transfer from the central railway station in to the world famous Icehotel 365 located in the village of Jukkasjärvi. The rest of the day is at leisure in this unique and breathtaking area. Tonight you will experience a night in the Icehotel 365. The ice rooms are hand carved by artists from all over the World. In thermal sleeping bags on a special bed built of snow and ice and on reindeer skins you will get a good night's sleep in the minus degrees. Accommodation in an ice room at the Icehotel.

This morning, wake-up to a hot lingonberry juice in bed, before enjoying a morning sauna and breakfast. After breakfast the day is yours. Perhaps enjoy an optional excursion such as snowmobile and husky safaris, Reindeer & Sami Culture Experiences, Northern Lights Searches and more. Tonight, you will sleep in an Kaamos warm room.

Breakfast at the hotel, then transfer from Icehotel to Kiruna railway station and board the train to Abisko Mountain Station. Here you are in the Abisko National Park, 250kms North of the Arctic Circle and one of the last true wilderness areas of Lapland, where majestic mountains frame the beautiful Abiskodalen valley and surround Torneträsk Lake, Scandinavia's largest alpine lake. On Mount Nuolja is the Aurora Sky Station, an observation centre for the Northern Lights. From the station make your own way to your accommodation - two nights are spent in Abisko.

Snowshoeing is one of the most ancient forms of winter transport and an important large part of traditional life in the far north. After breakfast put on your snowshoes and then start out across the snow-covered ground into the birch wood forest, through a long valley framed by mountain tops, clad in white. After a short stop to admire the view and to enjoy a light snack and hot drink (the classic Swedish "fika") make your leisurely way back to the station. This evening, enjoy the silence of the Abisko National Park at night. Take the chairlift up to the Aurora Sky station - after your eyes adjust to the dark, you will soon start to see more stars than you ever dreamed possible! And perhaps the magical Northern Lights will come out and play. At the Aurora Sky Station enjoy a four-course Nordic inspired dinner, then the local guide will tell you all about the myths and science of the Aurora Borealis. Then catch the chairlift back down. 2nd overnight in Abisko.

Breakfast at the hotel and then make your way back to the railway station and board the train for your journey to Narvik, in Norway. On arrival in Narvik make your own way to your hotel. This city has Narvik has islands to the west and mountains in every other direction, and spectacular fjords stretch north and south. Time at leisure. Perhaps visit the War Museum - Narvik was a very strategic town during World War 2 and the museum tells the tale of the battte for Narvik in 1940 - or the Museum Nord, which tells the story of the local indigenous Sami peoples. And visit Trinigon, the stunning, 18m high sculpture that is the National freedom monument, created in 1995 and made of high gloss polished steel. Overnight in Narvik.

Breakfast at the hotel before taking the 1,810m long cable car up to the highest station, for the most breathtaking views over Narvik City, the deep Ofotfjord and the surrounding mountains. Later today make your way to the bus station and board the bus for the two hour trip to Tromso, fondly known as the capital of the Arctic and situated in heart of the Northern lights zone, surrounded by hundreds of islands, breathtaking blue fjords, glaciers, and the majestic peaks of the 1,800m Lyngen Alps. On arrival in Tromso make your own way to your hotel for two nights accommodation.

Breakfast at the hotel. Today take the Tromso cable car up the mountain to enjoy the amazing views of the city and the surrounding islands, mountains and fjords. Remainder of the day at leisure - this university town has a lively atmosphere and friendly locals. Perhaps visit the Arctic Cathedral for it's daring architecture, the Polaria Aquarium (don't miss the Northern Lights & Spitsbergen Arctic Wilderness films), the Polar Museum to learn about the role Tromso has played in Arctic exploration, and the MS Polstjerna, a well preserved sailing vessel from 1949. Or sample some local beer at Mack Brewery, the world's Northernmost brewery with guided tours that take you through 130 years of beer brewing history. Or ask us about optional tours that can be added - these include husky, reindeer and snowmobile safaris, cruises and more. 2nd overnight in Tromso.

Breakfast at your hotel then check out and end of arrangements.

The operation of all excursions is subject to weather conditions. 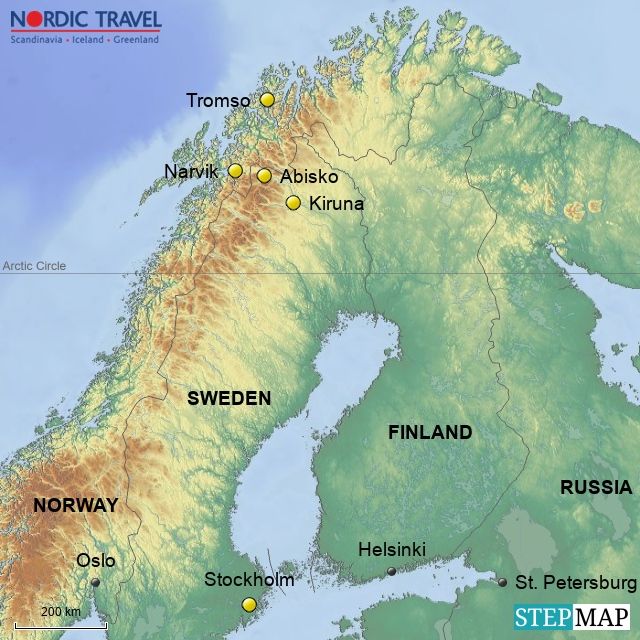 Similar tours to Across Lapland 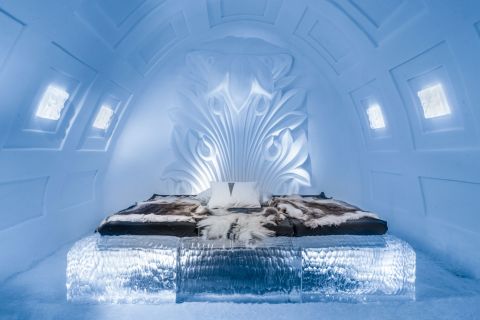